In this blog post, we are going to talk about how to deal with Maven transitive dependencies and some other tips when you are using Maven in your Java project.

Why using Maven in your Java project?

Maven is a build system to manage dependencies in your Java project that has also other interesting plugins that you can use in your project.

It’s been around for more than 15 years and it’s not going away anytime soon.

It became the de-facto standard for building Java projects, so a good strategy to became a productive Java developer would be to become familiar with it :-)

There’s no limit to the number of levels that you can have in your tree dependency. Because of that, the graph of included libraries can quickly grow quite large and we can have many levels of dependencies.

One problem that you might have is when a cyclic dependency is discovered. Maven does not allow cyclic dependencies between projects, because otherwise, it is not clear which project to build first. So you need to get rid of this cycle.

One way to break this cycle is to create an interface module and, an implementation module, which gets rid of most cycles (Review the concept of dependency inversion principle if you are not familiar with it).

As you can see we have introduced the interface Permissions to break the cycle that we had in the first picture :-)

Declare all the dependencies used

Including ONLY what you need in your project is a really good practice. You can take advantage of the maven dependency plugin, which has a goal called analyze that you can execute running the following command:

Declare all the dependencies that your project is using to avoid problems when updating your artifacts to newer versions.

Unwanted dependencies included in your project can be excluded within the tags of dependency tag in an artifact in the POM file. In the following example of Google Guava pom file, we can see the exclusion of an artifact when including the dependency of Google Truth.

On exclusion, the artifact will not be added to the final war/ear after the build process.

They are used to calculate the various classpaths used for compilation, testing, and so on. They help to determine which artifacts to include in the distribution of the project. Each one of the scopes affects transitive dependencies in different ways:

More info about the different scopes can be found here

A JAR is not being included

Another possibility is that as we explained before this dependency that is not included, might be excluded in some pom file (in case you are working in a multi-module project)

That’s why it’s a good practice adding all the exclusions (or inclusions) and versions in the parent pom file using dependency management tags.

In those cases that the jar is not included, it may cause a ClassNotFoundException when you run the application because the class that is being used is not defined.

In the case of a conflict, Maven uses the “nearest dependency” technique. 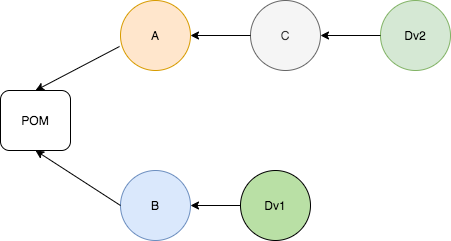 Some useful commands that you can use to debug problems are the following:

In this post, we have seen some tips when we are working with Maven in our Java projects. Hope you know more about this important Java tool. If you want to read more about this topic I recommend you to check out the Apache Maven official page where you will find more resources