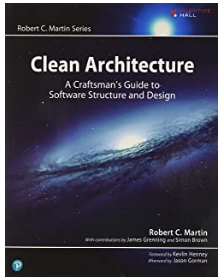 This is a good book by uncle Bob. In this publication, he explains how to achieve clean architecture and he mixes some stories from his experience to explain some concepts that help the reader understanding the philosophy behind them. Also, there are figures with drawings to explain the concepts.

I recommend this book to all the people that are interested in having a higher level picture of how to organize modules and applications in a way that is sustainable for the future, to maximize the productivity of developers and people working with software.

A really good book that anyone interested in software quality should read to become a better professional when facing more high-level decisions regarding the architecture of a software system.