One of the last tasks that I have been involved has been to reduce the technical debt of a tool that was using backbone and bootstrap in the frontend, and Java in the backend.

The backend part was using different REST API’s that were returning information that had to be displayed in the user interface (UI).

Those API’s provided data that didn’t change in time, so this was a good scenario to use a cache to avoid calling to those services every time that a page of the UI was rendered.

The cache used was one provided by Java cache system (JCS), an open source apache library that provides cache functionalities. To configure a cache you need to have a cache.ccf properties file where you configure the different aspects of your desired cache.

The first call to the service that used the cache was trying to initialize the cache using the following call:

If we look at the code from CompositeCacheManager.java method configure we can see that the code is trying to load a properties file.

The error that was returning was Failed to load properties for name . When calling the following method:

It was returning null because it was not finding the cache.ccf file in the classpath althought it was inside services.jar inside the WEB-INF/lib

To understant this definition we have to look at documentation of class loaders in Java.

class loaders follows a delegation methodology, if a class loader is not able to load a class it delegates the task to it’s parent class loader in the hierarchy: 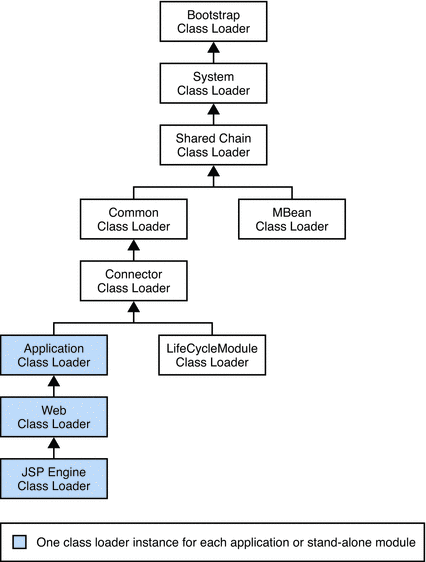 jar files inside lib/ are using the Application Class Loader, so jcs_1.3.jar was not able to find cache.ccf file because it was only available using the Web class loader.

Note that this is not a Java inheritance hierarchy, but a delegation hierarchy. In the delegation design, a class loader delegates classloading to its parent before attempting to load a class itself.

Changing the maven-ear-plugin configuration in maven moved services.jar outside the war/WEB-INF/lib/ folder and set it in root of the ear file:

Inside the Application.ear after doing the change in the pom.xml :

With this change the jcs_1.3.jar was able to read the properties fine using the following call:

Visibility of properties (or other resources) inside a Java EE application depend on where those files are placed and it’s important to understand how class loaders work if you are using a method like getResourceAsStream.

Also, reviewing the code of third party library that you are using is a good way to spot any problem that occurs during the development of your application.